We all know and eat Japan‘s famous instant ramen (or noodles in English). They come in all sizes, flavors, types and shapes, and it is consumed globally as a quick snack, a late-evening meal, an affordable eat, or even as an emergency ration — even astronauts take the space version of instant ramen during their travels to space!(CupNoodles Museum)

With this in mind, it’s not far-fetched to say that instant noodles is an indispensable thing in our lives (or our kitchen cupboards for that matter). So when you’re in Japan, it might seem wacky to make a stop to the famous interactive CupNoodles Museum; but I’m telling you now: it will be a visit that will be worth your time as you get to learn more about its history!

FACT: To date, there are two CupNoodles Museum in Japan, but the branch in Osaka Ikeda is the first and original one since it is the birthplace of the instant ramen: “Chicken Ramen” — the first in the world that was invented by Momofuku Ando (he is also the founder of Nissin Food Products).

Moreover, another benefit of visiting the Osaka branch is that it has FREE entrance as opposed to the other branch in Yokohama city in Kanagawa prefecture of that’s paid.

CupNoodles Museum Osaka Ikeda is a popular and fun interactive museum that exhibits the process as to how instant ramen was invented — and of course, it all started with Momofuku Ando.

This is just some of the many fun facts I’ve learned during my visit to CupNoodles Museum Osaka Ikeda. Beyond this, you’ll get to experience their other exhibits and attractions, namely…
. 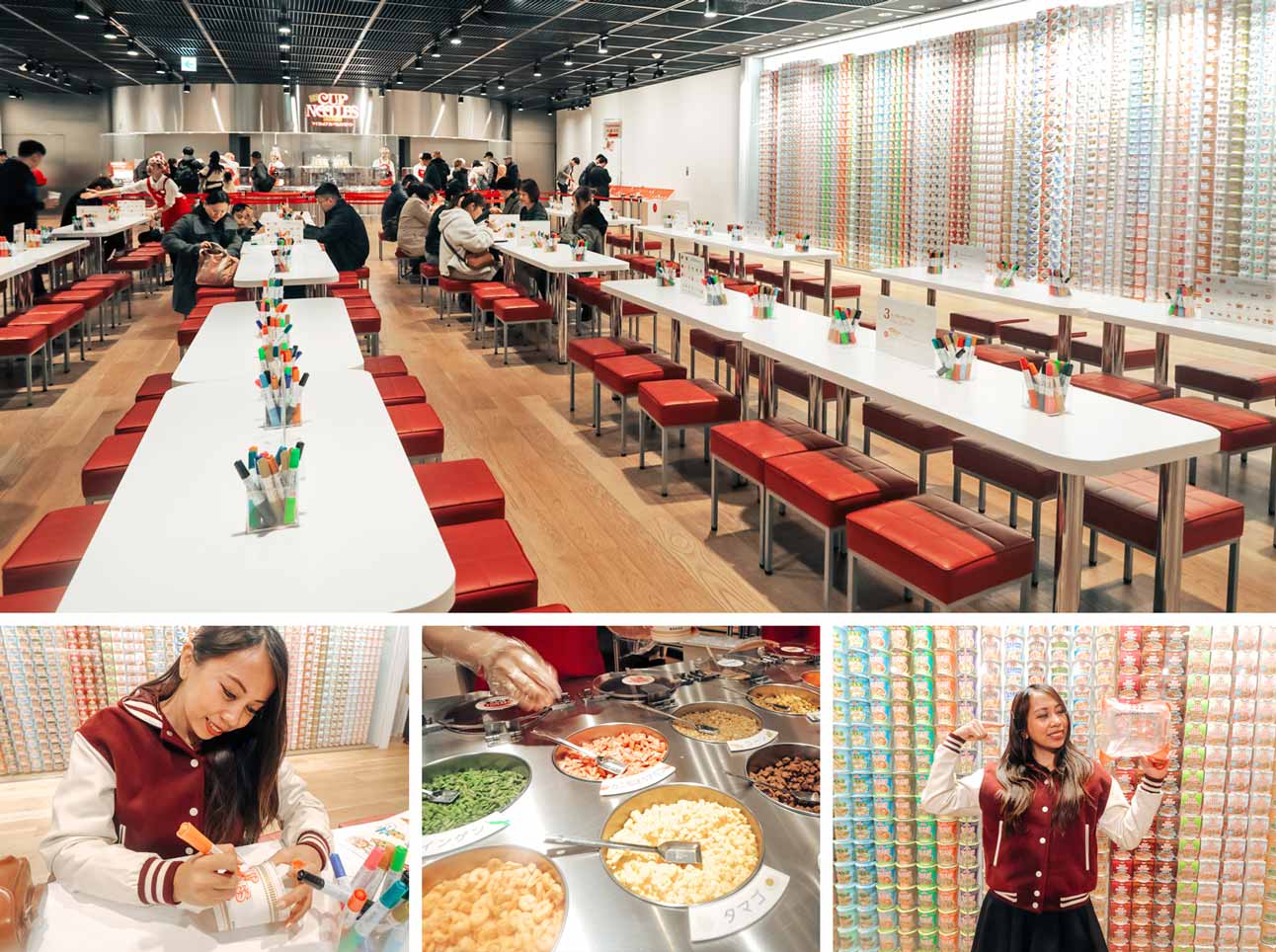 If you ask me, this attraction is one of the main reasons why people flock to the CupNoodles Museum; after all, it is where anyone can create their own ‘original’ CupNoodles package and take it home!

This was definitely a fun activity and the process was pretty straightforward with a lot of helpful instructions in English.

Basically, after designing my CupNoodles, I could choose one from among 4 available flavors, and then 4 toppings from among 12 other ingredients. 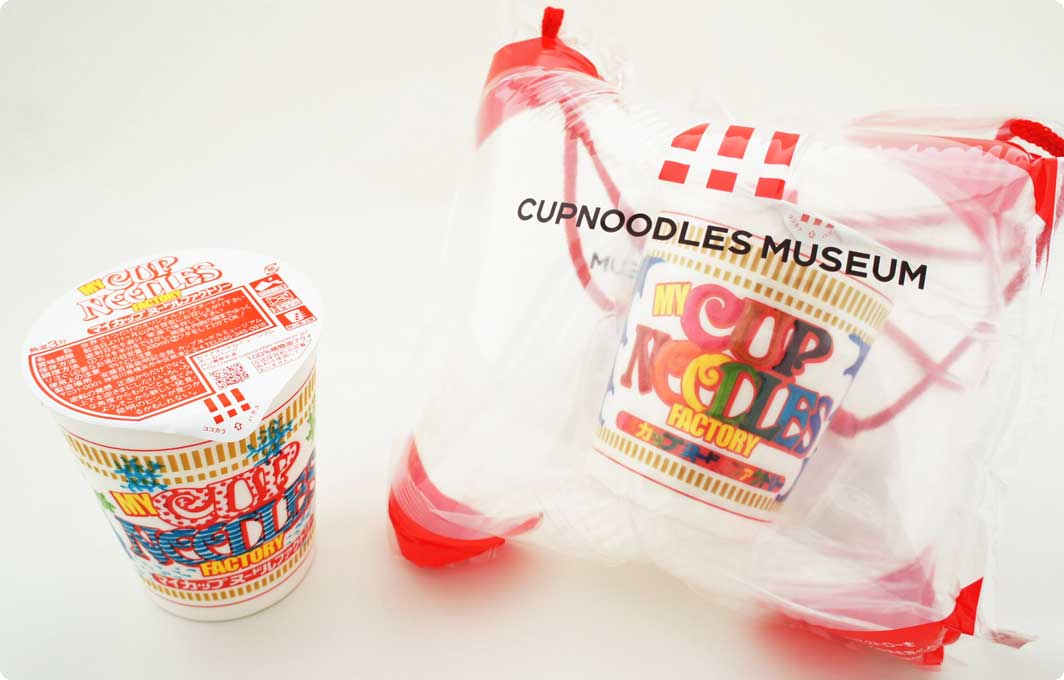 After that, I even got to witness how they seal and shrink-wrap a Cup Noodle. For the finishing touch, I could bring my cup noodles in a cute bag that I air-pumped by myself.

For the perfect photo, I suggest taking your shot in front of the giant exhibition of instant noodles in the work area. It shows the different Cup Noodles’ brand packagings that are used all over the globe as well as the data of how much it is consumed worldwide.

This is another hands-on attraction wherein you can make Chicken Ramen by hand. From kneading, stretching, steaming and up to the drying (flash frying method) stage of the wheat flour, you’ll get to do it all!*

*The staff will be doing the steaming and frying stage for you.

It’s definitely an enjoyable thing to do for people of all ages, and much like in the My CupNoodles Factory, you can take home the finished product.

What is the address and how much is the entrance fee?
The name of the museum is CupNoodles Museum Osaka Ikeda
Address: 8-25 Masumi-cho, Ikeda-shi, Osaka 563-0041
Entrance fee: FREE
Operation Hours: 9:30AM to 4:30PM with last admission at 3:30PM (daily except Tuesdays and holidays)
WEBSITE: [link]

How to get to CupNoodles Museum Osaka Ikeda? Armed with a Hankyu Tourist Pass, you just need to ride the Hankyu Takarazuka Line and get off at Ikeda Station. From there, the museum is only a 5-minute walk after you exit from the station’s Masumi-cho Homen Exit. On the other hand, if you are coming from Hankyu Osaka Umeda Station, it takes about 18 minutes by using the express train.

What is the Hankyu Train Pass? It’s a train pass that grants you unlimited rides on the Hankyu-serviced train lines that go through Kyoto, Osaka and Kobe.

OTHER TYPE: You can also try the Hanshin Pass for unlimited travel in Osaka and Kobe. (Cost: ¥500)

If you need help when riding the trains, just use the directions feature in Google Maps — I find this as a very helpful tool if I want to reach a certain place from a particular location. However, take note that Google Maps doesn’t work offline if you want routes or transportation schedules, so I recommend that you get a pocket WiFi or a SIM Card to stay connected online).

Should I get a visa to visit Japan?
If you’re NOT a citizen of any of Japan’s exempted countries, you are then required to avail a visa beforehand. If you’re from the Philippines, you can read my guide on how to get a Japan visa in Manila here.

Don’t miss out — come with your family and friends to enjoy a day full of ~instant~ fun!