Japan has — without a doubt — a rich culture that is known by all; but while some of those traditions are thriving, there are some who are at the risk of dying out. To date, one of those lesser-known yet fascinating traditions would be of the ‘ama‘ free divers that I have managed to discover lately.

The Ama (海女) or female free divers are found in various areas of the country but they are predominantly found in Mie Prefecture. As a part of a beautiful centuries-old tradition, they plunge underwater with simple gear alone to primarily catch marine life like sea urchins, snails, seaweed and abalone among many others (depending on the season).

Nowadays, it’s a dwindling practice with only about 2,000 ama left; but thankfully, it still has a considerable community that aims to preserve it all especially in the coastal prefecture of Mie. So in order to meet and support some of these amazing free divers, you must head over to Toba — a place that can easily be a part of your itinerary’s day trips from Osaka!
.

Ama, which literally means ‘woman of the sea’, has a history that dates back for more than 3,000 years in Japan’s history. Back in the olden times, there were no other options for women to work, that’s why those who lived in coastal areas typically turned to being an ama.

One could even say that being an ama was some sort of ‘rite of passage’ for women because if they weren’t one, they couldn’t get married.
.

◘◘ What does an ama typically do?
As a profession, an ama specializes in free-diving as they catch abalone, sea cucumbers, shellfish and many other sea goods in almost every mornings. With only minimal gear, they can dive up to 10 meters in just a minute(!) and in order to do this — as well as to not damage their lungs — a special method of breathing has been passed down for generations.

There are 3 types of ama divers: kachido (those who directly swim to the ocean from the shore), funado (those who go to the fishing ground using the boat with their wife/husband or parent/child to operate in 2 in 1 pairs), and norai (those who go in a group in one boat).

Nowadays, ama dive during the mornings starting at 9AM (weather permitting, excluding the middle of winter and typhoon season). They do this for about 4 hours before selling their catch in local markets. A fascinating fact that I’ve also discovered is that they don’t dive on dates that have the number 7 as it is considered unlucky. They also don’t dive every Tuesday and Saturday so as to prevent them from overfishing.

◘◘ What diving gear does an ama use?
It depends per region, but it has been recorded that some ama used to wear only a fundoshi (loincloth) to make it easier to move in the water, as well as a tenugui (bandana) to cover their hair. Meanwhile, some others wore a full white cotton clothing with a buoy and a basket that’s tied to them. Along with this get-up, they carry a flat metal bar that has a hook for catching fish, octopus etc. and a plain blunt end for prying off shellfish or abalone from rocks.

The skinny-dipping practice has long been lost but the latter white costume has been mainly maintained across Japan. When the Meiji era started, they have started to wear goggles and eventually the rubbery black wetsuits.

Nevertheless, the female free divers still don’t use oxygen tanks because even though it will permit them to stay in the water longer, they still want to preserve their tradition. Not wearing one also prevents them from overfishing.
.

◘◘ How does someone become an ama?
Like most traditional professions in Japan, being an ama is not something that anyone can decide to become — it is primarily hereditary and the rights and training process are passed from mother to daughter. Usually, they start learning at around 15 years old.
.

◘◘ How long does it take to train and become an ama?
It takes about 10 years to learn. Given this required number of years for training, most of the youngest expert ama free divers are at around 40 years old. With this in mind, most ama are elderly women with some of them surpassing even 80 years of age!

Currently, there is a lack of younger women who want to succeed their elders, and seek a safer and better paying profession. Add the modernisation of the Japan fishing industry, then this old tradition has been slowly dying out. Back in the 50s, there were more than 17,000 free divers around the beaches of Japan — but today, only around 2,000 or less are found in 18 prefectures who still practice the custom. Nearly 1,000 of those work in Mie prefecture.
.

◘◘ Why are ama free divers composed only of women?
It is said that one of the main reasons why is because females have a thicker layer of fat than males, thus helping them endure colder waters during long periods of diving. Being an ama before was also one of the top kinds of work for women that enabled them to be self-supporting.
.

◘◘ Where can I specifically meet ama free divers?
There are various places around Japan but I would highly recommend dropping by at the Hachiman Kamado Ama Hut Ōsatsu of Toba in Mie Prefecture.

After all, it is in here where you can meet, chat and eat with the ama at their rustic goya hut (kamado, a traditional wood structure where they rest after diving). As they cook their fresh morning catch over the fire, they will share their life and work — and this was the time where I got to know more about them. Honestly, I felt quite privileged to have a chance to talk with these amazing women!
. 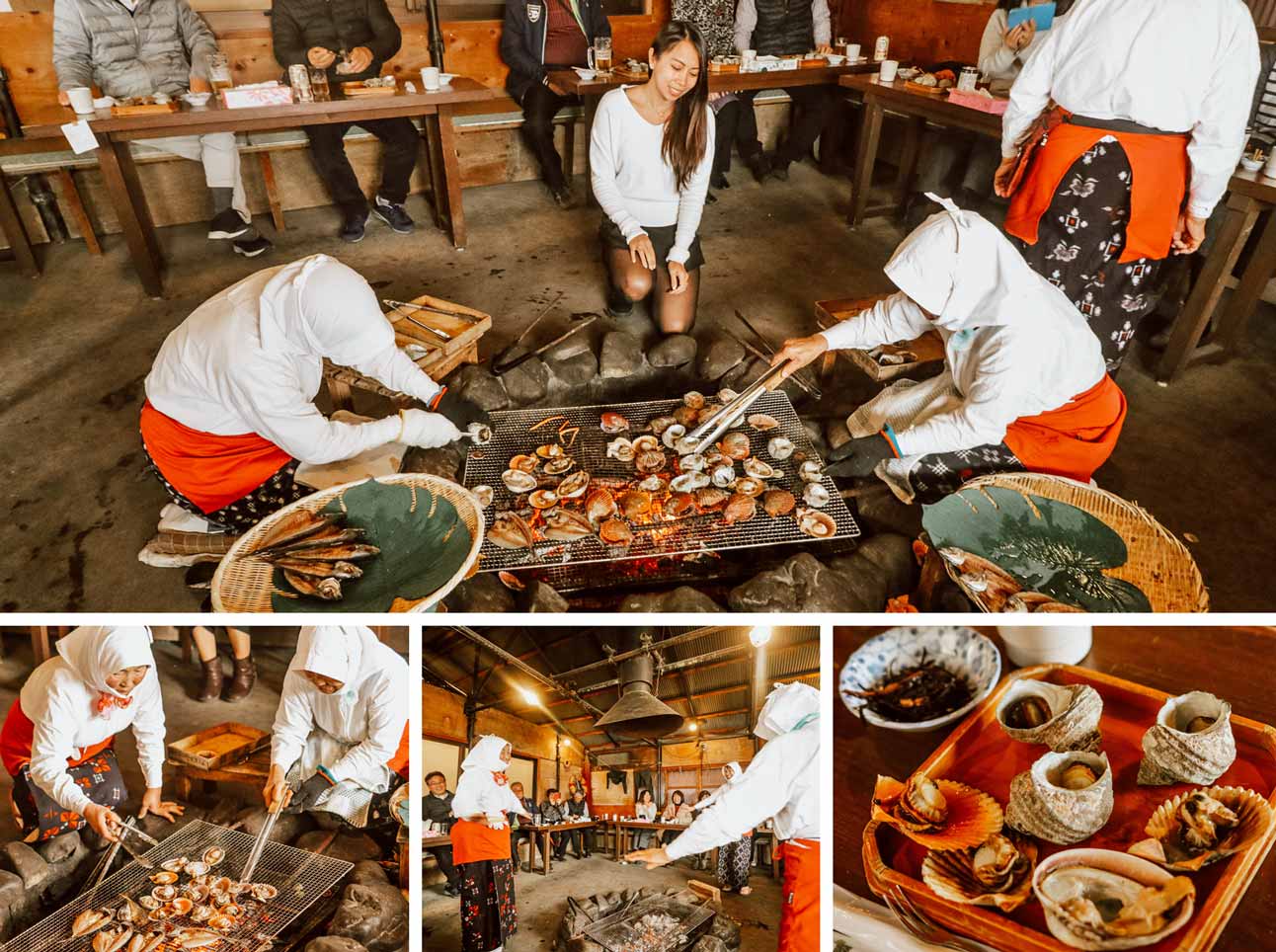 All of the ama that you will see in Hachiman Kamado Ama Hut are active free divers, which is quite impressive since most of them are beyond their 50s.

Reiko Nomura, the one who has a star on her white hood (symbol of protection or ‘seiman’), is not an active diver anymore but she is the oldest ama in Japan! She started diving at 14 and stopped at 80. Today, she is already beyond 85 years old.

At the same time, they will also perform a folklore dance around the fire for everyone. Moreover, if you want to kick it up a notch, you can dress up in the traditional white ama diving costume and take photos with them all for only ¥300. (Young children below 13 years old can wear it for FREE).

How much to book with Hachiman Kamado Hut?
The meals range from¥2,000 (+tax) for tea time meal up to ¥9,000 (+tax) for a luxury lunch meal. For more details and extras (such as spiny lobster, abalone, etc.) you can check their menu online. If requested, they can also serve halal or vegetarian meals.

To book, simply go to this link. It is preferable to book a week in advance to ensure confirmation.

How to get to Hachiman Kamado Hut?
If you’re coming with your own transportation, there is free parking in the premises both for cars and buses. Otherwise, the best way to reach the place is via the Kintetsu lines. As a visitor, it is best to buy a Kintetsu Rail Pass and head over to Toba. From there, once you book via Hachiman Kamado’s website, you can use their free shuttle bus that departs from the station (and which will also drop you off after the experience).

What is the Kintetsu Rail Pass? It’s a train pass that grants you unlimited rides on the Kintetsu-serviced train lines.
VALIDITY OPTIONS & TYPES:
*Children under 6 travel free

If you need help when riding the trains, just use the directions feature in Google Maps — I find this as a very helpful tool if I want to reach a certain place from a particular location. However, take note that Google Maps doesn’t work offline if you want routes or transportation schedules, so I recommend that you get a pocket WiFi or a SIM Card to stay connected online).

Should I get a visa to visit Japan?
If you’re NOT a citizen of any of Japan’s exempted countries, you are then required to avail a visa beforehand. If you’re from the Philippines, you can read my guide on how to get a Japan visa in Manila here.

Come and discover these legendary women and immerse yourself in one of Japan’s oldest traditions!